Quaint Big Sur Inn Is Work Of the ‘Master Builder’ 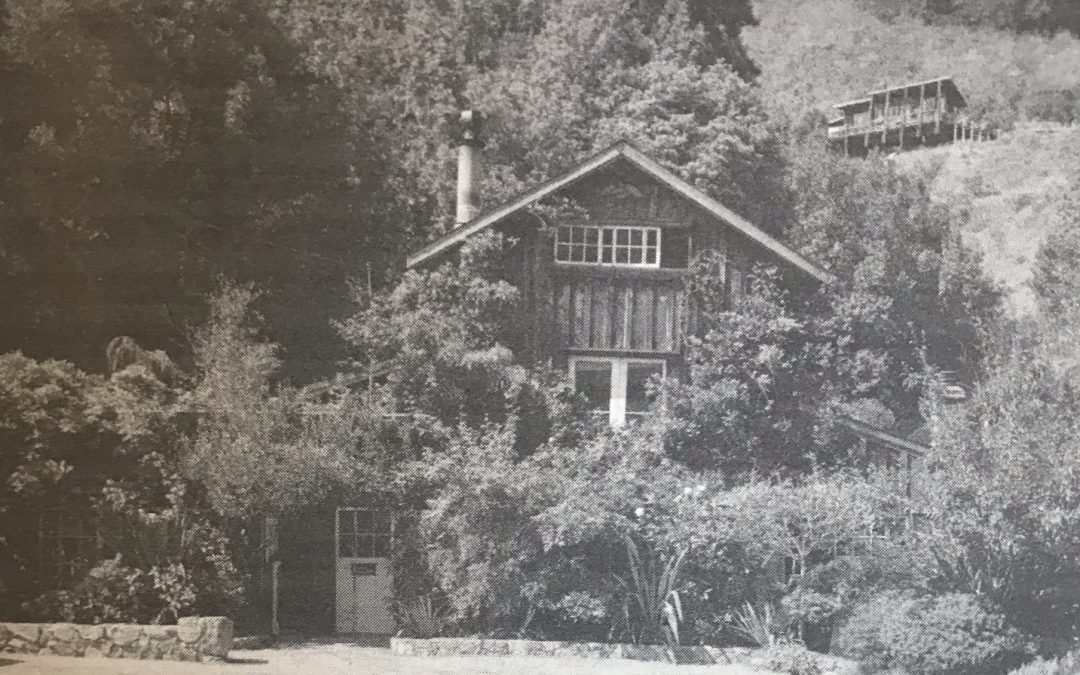 Deetjen’s Big Sur Inn is situated near the Castro Canyon Bridge, about 30 miles south of Carmel.

A group of rustic buildings is nearly hidden from view until the southbound tourist is rounding the bend is struck with the incredibly lovely setting close to a mountain stream with majestic redwoods on every side facing the blue Pacific.

The Norwegian-style buildings represent 10 years in the life of Helmuth Deetjen, called the “Master Builder.”

Born in Bergen, Norway, Nov. 11, 1878, the son of Peter Deetjen, a prosperous tobacco manufacturer, Helmuth came to America as a young Oxford graduate with a degree in civil engineering. When asked about his first experiences in America he humorously answered, “I wasted two years in New York City, two years in Florida and three years in Hollywood with Cecil DeMille Studios before coming to Carmel where I found a good life.”

IT WAS HERE that Deetjen started to do the thing he loved, building in his own inimitable style. His good friend, Jean Varda, once said to him, “No one but you should be allowed to build in Carmel.”

It was also here that he met Helen Haight, who had come from Atlanta, Ga. To San Francisco where she was a buyer for the White House. An expert designer and dressmaker she started the Cinderella Shop in Carmel. A romance developed between the southern belle and the handsome blue-eyed builder from Norway and they were married, making their home in Carmel, where Helmuth kept busy building the rustic-style cottages so much in demand.

Helmuth loved the country down the coast. It reminded him of the fjords of his. Homeland, and in 1927 he sold his Carmel home and bought six acres from Roche Castro. Here he began work on his dream project.

AT THAT TIME, the spot where the buildings now stand, was a deep ravine. This he filled by hand, putting gin a great culvert and piling rocks and soil on it until he had a level building site.

All the lumber in the first buildings came from the old wooden wharf in Monterey. Helen Deetjen hauled every stick of this lumber, making the trip to town every day in the truck while her husband kept at work on the buildings. At this time the coast road ended at Castro Canyon.

The restaurant was first run by an English girl named Barbara Blake, but after a short time the Deetjens took it over, and soon the fame of Mrs. Deetjen’s southern baked ham and other specialties spread abroad and the little restaurant became known far and near, not only as an eating place but as a restful haven and meeting place for those who appreciate the beauty of nature, inspiring companionship and good music. There is always a fine record concert featuring such composers as Bach, Purcell, Vivaldi, Beethoven, Mozart or Brahms.

IN ADDITION to the restaurant, the Deetjens had an antique shop and book store. Helmuth made and sold beautifully hand-carved furniture. Orders came from as far as New York City. Among his creations were candle sticks, bowls, benches, tables, as well as cabinets. Connoisseurs of beautiful artistry in wood clamored for his work. Helmuth could not be hurried and turned out work as near perfection as can be made.

From time to time rooms were added and named as fitted their use. There was the Hay-loft where the Deetjens lived; the. Honeymoon room; the Chalet; the Creek House; Nietszche’s Nook; and the Van Gogh room where an original of the artist formerly hung.

Many celebrities were entertained here. Among them were Greta Garbo, Frederick Ledebour, Iris Tree and Lady Diana Manners. Sterling Hayden brought his bride here on their honeymoon, and several ambassadors of the United Nations were guests at the Inn. Nicholas Roosevelt and Henry Miller were frequent visitors.

HELEN DEETJEN often looked  after the Miller children, Val and Tony, as well as other neighborhood youngsters. She had a wonderful way with children, and although the Deetjens had no children of their own, they all called Helen “Grandma”.

Now, although her activities are limited, as she uses a wheel chair about the premises, she takes long drives going to Monterey or Carmel twice a week, enjoys meeting friends and helps keep the business going. Many friends gathered to help celebrate her seventy-fourth birthday October 22.

Helmuth greets visitors with a twinkle in his very blue eyes, dressed in blue jeans, wearing a jaunty beret, looking not a day over sixty.

“The most remarkable contribution to our guest book,” he told us, “was from a primitive young man in blue jeans, who wrote ‘after all, my 6,000 mile hike through the country was worth it because I stopped here’.”

Guests often stop for one night and are so enchanted by the old world atmosphere, Helmuth’s tales of the Norseland and the seduction of fine music, they stay on for days or weeks.

The years past swiftly and with the completion of the coast highway came the rush of busy seasons, but through it all Deetjen’s Inn has kept its spirit of restful tranquility, and within its quiet seclusion one may forget for a time the cares and frustrations of the outside world.