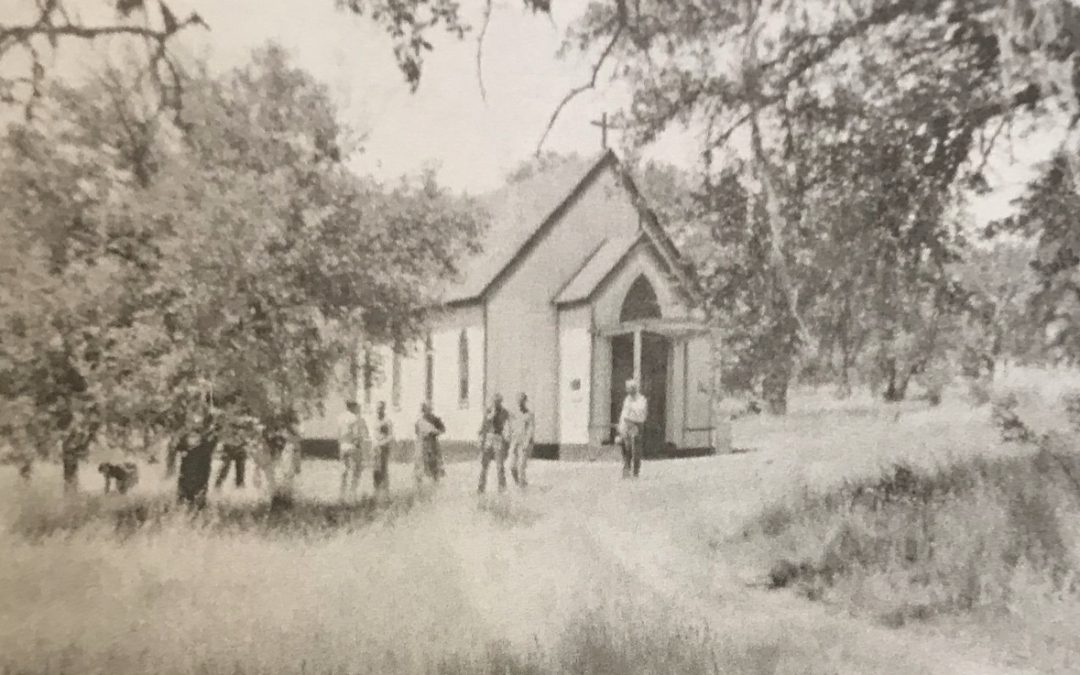 It was in the year of 1884 that Reason Plaskett, with two of his brothers, Robert and Marion, took the trail to Jolon to build a church. Riding horseback all the way from Pacific Valley, leading a mule packed with carpenter’s clothing and tools they were met in Jolon by Rev. J. S. McGowan who had come from Salinas to establish an Episcopal church at Jolon.

Rev. McGowan had established St. Pauls’ Church in Salinas which was consecrated by Bishop Kip on July 4, 1875. He started the first Episcopal services in Salinas in a rented hall in August 1873 just after coming to California from Platville, Wis. He also founded St. James’ Church in Monterey, consecrated by Bishop Kip July 14, 1878. Due to illness he came to Jolon where his health improved so the Bishop transferred him to this new location, where in 1884 who churches were begun, St. Luke’s at Jolon and St. John’s at San Miguel.

At that time Allan McCain, who was married to Olive Plaskett, taught school near Jolon and aware of the skill in carpentry of his brothers-in-law, who lived on the coast, suggested they be given the work of building St. Luke’s. He was an earnest Episcopalian and he, as well as the Dutton family, the Smiths and many other early families, contributed greatly in the effort to get a church built in Jolon.

Alfred Smythe Pigott, an Englishman, who married Alice Dutton made a trip to England to bring back the Gothic windows used in the church at Jolon. These were the first windows of this kind the Plaskett men had worked with and it took no little studying on their part to get them properly framed.

HOWEVER, the work progressed and Oct. 11, 1885, St. Luke’s was consecrated by Bishop Kip and one week later he consecrated St. John’s Church at San Miguel. (St. John’s. Church is no longer in use.)

Rev. McGowan could not find a house to live in so he took up a homestead claim and built a house of his own.

In Rev. McGowan’s memoirs he wrote:

“To hunt up the scattered sheep of the fold meant long drives over the mountains and through the canyons. As I drove up to one place, I asked an old man who looked as though he had seen a good deal of frontier life, if he knew of any Episcopalians in the neighborhood? He eyes me with a puzzled look on his face and asked, ‘What may they be?’

“I explained and he remarked ‘I take no stock in them kind of people no how.’

“I thought it was high time to build some churches as object lessons in such communities. There were no bridges over the rivers at that time and I had to ford the San Antonio twice, the Nacimiento once and also the Salinas river in making the journey between Jolon and San Miguel. A new crossing had to be made after each freshet.

I HAD A fine horse called “Bay Dick”, true and faithful. On one occasion I had to ford the Salinas River after a heavy rain and the crossing had been changed of which I was not aware. It was dusk evening when I reached the river and I drove my horse in and he went down in the quicksand, but before the sand packed around him he threw himself on his side and drew his feet from the engulfing sand so that he had a broader base to rest upon.

I at once divested myself of my clothing and tramped the sand so they would sink and the water washing over the horse’s body I unharnessed him, lifting on wheel of the buggy at a time, pulled it back from the horse and tramped a solid foundation for him to rise upon.

Dick had been quiet all this time waiting for his master’s aid. I said, “Get up Dick,” and he was soon on his feet.

With my clothing tied upon my back by my suspenders, I tramped a path across the river and I and my good horse was safe, but very chilled. Well, we cannot always have our way and go to heaven on beds of ease and roses.

But these are a few of the experiences I had in founding some of the churches which I built.

WHEN THE railroad was extended from Solad to Templeton new towns sprung up along the line-King City and Lucas, San Ardo and Bradley, I gave services at all these places going as far south as Templeton and I had organized Missions at San Ardo and King City.

On one occasion while visiting at King City a seven-day rain took place two spans of the new bridge across the Salinas River were swept away and I had to ride in a dry goods box pulled by a rope a distance of over 100 yards suspended in mid-air in order to reach the end of the bridge.

It was during the storm that I started subscription for building a church. A lot was donated by Mr. C. King and a church erected at the cost of about $1,000.  It was named St. Mark’s and was consecrated by Bishop Nichols April 12, 1891.  It would take a book to relate all my experiences while these missionary efforts were being put forth, kind friends were ever ready to help me and while this was pleasant I could not control winds, rains and tides.

IN THE EARLY years, E. A. McGowan, son of the founder had charge of both Jolon and San Miguel churches, The McGowan place is now owned by Helen Dodge Dies, a descendent of the early Dodge family of this area. Deborah Dodge married Lt. George Dutton of California, volunteers  and they ran the old Dutton Inn for years. Their children were Alice, Susie, Lorraine, Ed, and Marno.

Alice went to England with her husband Alfred Smyth Pigott and reared four sons, whose descendants write to their American cousins whom they have never seen.

Ed Dutton, whose wedding with Oda Butterfield took place in St. Luke’s church, Jan. 24, 1897, was an ardent supporter of the church. During the years of inactivity he had a fence put around the cemetery and repair work done.

Mirno Dutton, who married George Thompson, was born here and has always had a lively interest in St. Luke’s. Her daughter Vida, Mrs. Walter Bashman, now comes from her home in Bradley to worship at St. Luke’s.

It would be impossible to list all of the early families of St. Luke’s for the years when the San Antonio was inactive many of the children of the Catholic families attended services at St. Luke’s, among these were the Forbes, Yates, and Gil families.

THEN FOR a while our own church was abandoned, coming to life again in 1920 when C.L. Thakery came from Paso Robles to serve and such families as the Wharffs, Getzelmans, Harry Taylors, Ducks, Millers and Plasketts helped out. The guild was organized and W. R. Hearst gave them the use of the hall at Jolon rent free.

After no many ranchers sold to Hearst, the population dwindled and the church again was vacant except for special services when the Vicar from King City would officiate.  Then in 1955 Dwight Edwards, a student of Pacific was sent to San Ardo as a student Priest and to serve in Jolon. Interest in St. Luke’s was revived and plans for the construction of a parish hall were made. After his ordination, Dwight Edwards went to a church in Mountain View where he still is and briefly Father Marthy and Rev. Bill Stevens serve St. Luke’s.

Finally, Rev. Norman Boyd was assigned to St. Matthew’s at San Ardo and St. Luke’s in Jolon and served 2 ½ years until July 1, 1959 when he was made vicar of St. Matthias of Seaside and Rev. Samir Habiby became vicar of San Ardo and Jolon churches.

Rev. Habiby was born in Palestine and had the distinction of being the first Arab to be ordained a priest in the United States. He served St. Luke’s until March 1960 when he resigned to become associate rector of the Church of the Holy Faith in Inglewood where he now is.

THE PRESENT vicar of St. Luke’s and St. Matthews is the Rev. Robert Adams, a native of San Francisco, who with his wife and three children, reside at Lockwood.

Great strides have been taken in the work of the church during the last few years, the Parish hall is completed, a project unique in the fact it was completed by members of the community who made the bricks, donated their time and did the construction work themselves. The building includes a study for the vicar, a kitchen well-equipped, and church school facilities.

To quote the Rev. Bob Adams: “So we live among the history here, yet we are so much a part of the twentieth century here, as much as are the metropolitan areas. The differences may be seen in that closeness of history that is here through the succession of the families, the continuity of purpose and vocation that exists within the surrounding hills. One example of this is the fact that many of the same families that were in the building of the church are still active in church life today.”

MRS. W. E. MERRITT and Mrs. Fred Merrit, Cliff and Vince Plaskett are direct descendants of the builders of the church. The Marinus, Roth, Parlet, Getzelman, Paulsen families are hardworking descendants of pioneers.

Mrs. Phillip Homes is the able organist at St. Luke’s. St. Luke’s sole project for fund raising is the annual spring Pilgrimage, which this year will be May 7, when a barbecue is services and entertainment provided.

I should like to close my story by again quoting Rev. Adams as he issues his invitation as follows:

“This is our story, we need your support, come and share with us the riches of the country and mountain air. Share our fun as we entertain you with home grown talent. Taste our food, the finest of beef and desserts that become famous once they are sampled. Your steaks will be broiled over an open spit in the fresh open air, you’ll get your money’s worth and more. Once you have come to a barbecue you will want to come again. You will not forget this valley. Remember the Jolon Barbecue of St. Luke’s Episcopal Church May 7th, 1961 from noon through 5 p.m., Evensong at 5 p.m. See you there.”