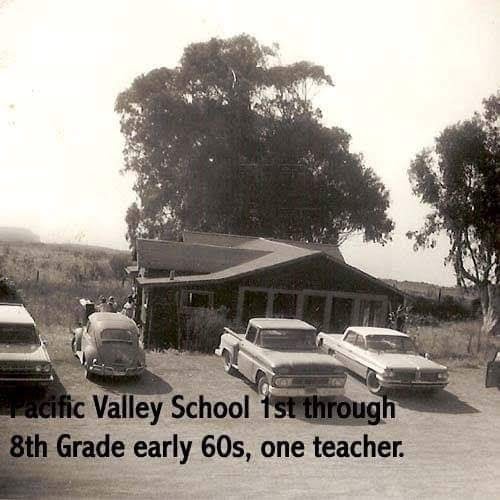 Last month we told of the Redwood School–its early days and as much as could be learned about the teachers.

Before we go on to the history of Pacific Valley School, we will include a quote from a letter from the daughter of Miss Lyons who taught Redwood School probably in 1893-94.

“My mother, then Electa Wison Lyons taught at the Redwood School some time in the 1890s. She was graduated from San Jose Norman in 1893.

As I remember she rode horseback or muleback over precipitous trails from Jolon. She feared steep places and the ride was quite an ordeal. Her pay was $60 per month and she boarded with the families living near the school.

She had a picture of the “new” redwood school which appeared to be made of regular lumber. She told of a mountain lion jumping into a corral and carrying off a calf while she was there.”

Pacific Valley school opened in 1880 with Alan McLean as school master. Laura Madera (one of the Mansfields) recalls going to school at the age of four to help out with attendance (no age limit then) carried high on Mr. McLean’s shoulders. The school was about half way between the Mansfield house and that of Grandfather Plasketts (W. L. Plaskett). The Byron Plasketts lived a half mile further at the south end of Pacific Valley.

These three families were the only ones attending the school at this time. Alan McLean later taught at Argyle School near Jolon. He married Olive Plaskett and they lived in Salinas where he was county auditor for many years. Their daughter Stella married Dr. Wm. Bingaman.

PACIFIC VALLEY school lapsed until 1912 when Mrs. Dow taught. By this time the Krenkel children were ready for school and the boys Jim, Bill and Charley came all the way to Pacific Valley.

Lonny and Alfred Davis walked from the Davis mine in Plaskett ridge to school at this time. Elton Mansfield was the only one left in the valley to go. Mrs. Krenkel moved down near the Mansfield place for a while to send her children to school, but felt she was needed in her home in Los Burros, where all her interests lay so it was decided to divide the teacher’s time between Pacific Valley and Los Burros and this was done for a time.

The teachers in these years were May Moore, Jessie Anderson, who was a great horse woman, riding home to. Salinas nearly every weekend and back for school by Monday morning. She still lives in Salinas. Mrs. Wimmer with a daughter named Velma was the next teacher. This was 1918. Mary Keys taught two years then Miss Clark, Mrs. Stiverson, Miss Savaker, Mrs. Lawhead, Miss Parsons, Miss VanVick, Miss Leta Burton and Mrs. Mae V. White.

In 1919 the William Shuey family moved to the coast and their three children graduated at Pacific Valley–Elizabeth, Bill and Francis. The Shueys moved out in 1927 and the school closed again. The John Ingram family attended school in Pacific Valley until 1925 when they moved up the coast and went to school at Mill Creek.

IN 1933 an emergency school was opened at the construction camp at Wild Cattle Creek with Mrs. Christensen, the wife of one of the engineers teaching. The children of the men working on the new coast road attended this school.

The school at Wild Cattle Creek lasted until 1937 when Pacific Valley school opened again under San Antonio School. Anita (Weferling) Sands taught for the next five years. In 1942 when Anita quit teaching she had only two pupils, Wesley Garcia and Shirley Whitney. School closed again until 1945 and what pupils were left went to school in Big Sur.

Robbie (Mrs. Charley Krenkel) taught the next two years and in 1953 the Pacific Valley District was re-established with Mrs. Jack Curtis as teacher. Mrs. Boundy followed and then there were one or two teachers who stayed a very short time.

MRS. LEMMON, who now lives in Alaska, was the next teacher followed by Mr. Chung, a Chinese who lived at the Ocean View mine while teaching in 1958.

In 1959 Helen Leopold, wife of Warren Leopold, took up the reins and the school has flourished under her able direction. The attendance varies as the state highway families come and go. Some of them with children of school age stay for years others get transferred elsewhere.

So, now, as in the past since 1933 we rely on the highway families to keep the attendance up. There are a few local children and, of course the “Beatniks” come and go with a child or two in school from time to time. There are now 20 pupils enrolled and we have a newly constructed building to welcome the descendants of the pioneers who kept the Redwood School going as well as those of the third school the story of which follows,

The Mansfield School opened in 1888 to serve the families of Los Burros mines–Lonnie Plaskett, Pete Gillis, Fred Sturzneggar, Ab Fancher and Bane. The last three families lived            closer to the coast near Gorda.

The first session was held in an old homesteader’s cabin. In a few years a new school house was built from native timber in a nearby Spruce Creek.

The desks for teacher and pupils were all hand made. The carpenter work was done by Lonnie Plaskett, Fred Sturzneggar, Pete Gillis and Ab Fancher. Fred Sturzneggar was a cabinet maker and took pride in turning out beautiful carved furniture.

Ida Swanson Ward, who gave me the early history of Mansfield District, moved from the coast in 1892. The teachers she remembers are Miss Bird, Emma Jennings, Miss Calhoun and Nina Berger. She remembers the teachers boarded with her mother Mrs. Fred Sturzneggar who lived on the flat above Gorda point known at that time as the “lily pond.”

To this day the calla lilies bloom there as they have spread and naturalized. All the children walked to school–“no bus to pick us up at our door as they do these days,” she reflected.

After the Sturzneggars left, the teacher stayed with the Lonny Plasketts until they left in 1904. Probably during these years some of the younger children of the Lonnie Plasketts attended school–Arlie, nicknamed “Dude”, Nellie, and Hallie. Louis was only four when the family moved near King City. Ed Melville tells of attending Mansfield School in 1902.

MISS ETHEL BONNY who still lives in Pacific Grove taught here in 1893 at the age of 18. She later taught Pacific Valley school probably in 1894. Miss Bonnie is now 87 and makes her home with her sister Mrs. Ruth Lewis in Pacific Grove.

Other teachers of Mansfield School while it was located in the Los Burros hills, were: Miss Emma Blanchard, now Mrs. Allen who resides in San Jose. Miss Nina Berger who taught in 1902 married Albert “Allie” Plaskett in 1893 and taught Pacific Valley school that year and later again taught the Mansfield School for several years. Her son Clarence Plaskett, now living in Morro Bay, recalls Jess and Roy Plaskett tossing him in the air at a very early age when his mother taught the Mansfield School. The Allie Plasketts had a homestead on Willow Creek flat at that time.

In 1904 the Lonnie Plasketts moved to King City area and the Mansfield School lapsed and was later transferred to Mill Creek where the children of Mr. and Mrs. R. M. Digges and those of the Edward Sans family went to school. The first school these children attended was a private school taught by Miss Ida Davis of Santa Maria whose father Alvis Davis operated the Davis mill or as we called it the Lower Mill situated about 1 1/2 miles from the mouth of Mill Creek. Ida taught in a little building on the Digges place.

The following year the Mansfield School District reopened in a school house below the Sans Bros. Saw Mill or the upper mill, with Miss Franc Gause of Jolon, as the first teacher. The pupils the first year were Pearl, Julius, Marguerite, Charley Digges, Carl, Mabel and Olive Sans and Regina Donaldson.

LATER ON, Frank, Sally and Robert Digges and Albert Sans attended. Some of the Canieti and Moros also attended.

The teachers following Miss Starr were Elizabeth Mulcahy, Miss Lizzie Nichols, Mrs. Estrada, Miss McIntyre and again Mrs. Mulcahy now Mrs. Charley Sans who taught until 1910 when the Sans moved away from Mill Creek and the school was moved to the lower mill with Miss Ruth Powell as teacher. She was followed by Adelaide Williamson (Now Mrs. E. W. Smidt of Salinas) then Mrs. Houston, Mrs. Bertha Lopes and lastly Mrs. Margaret Shuey.

During these years the Bautista Avila younger children went to school here–Joe, Benny, Adeline and Theresa, also Marjorie and Lynna Mitchell and Santos and Romulo Moro.

BOTH MABEL and Hester Shuey went to school in Mill Creek when their mother taught. Mabel is now Mrs. Don Lynch and lives in Carmel Valley. Robert Digges, now a Lockwood farmer, was graduated under Mrs. Shuey.

The Mansfield School lapsed now for the second time and Frank Digges went to Redwood School and graduated under Mrs. George Harlan.

The last year of the Mansfield School was 1916, except for a period of one year in 1924 when the school was revived and Mrs. Joe Waggoner was the teacher. The John Ingram family lived there that year with five children Edna, Walter, Irene, Joe and Bill who attended the Mill Creek school with Mrs. Waggoner’s son Joe and a boy named Kessler Frye who lived at that time with Henry Kilsdonk who worked in the timber on Mill Creek. Joe Waggoner also worked in the timber. Mrs. Waggoner now lives in Morro Bay. Her son is the Standard Oil Distributor along the coast and her grandson Dave Wickson is a veterinary in Morro Bay.

THIS SCHOOL was held in what was called The Cook house, built by Japanese when years before around 1910 they shipped lumber out of Mill Creek.

Great flumes were built and the waters of Mill Creek diverted into them to float the lumber to the coast where it was piled beside a warehouse to be loaded aboard ship. In 1925 the Ingram family moved to Watsonville and the school closed. The Waggoners moved away and no children of school age were left.

Little by little the families moved out and today there remains only the ruins of the old mill wheel and flume — Young redwoods have sprung up through the floor of the school house — and the old trail up Mill Creek is silent except for the call of the blue jay from a tall redwood tree, foxes and coons and other small animals scurry about and here in Mill Creek one may see or hear a California mountain lion. It is a favorite haunt for this rarely seen specie. Safety lies in the many small heavily timbered canyons on each side of the creek.

Recently a family named Avent acquired some property at the mouth of Mill Creek ad they plan to build a home there and raise their family so perhaps in some future day the canyon will again ring with laughter of children whose adventuring steps will again travel the grass grown trail.

Pacific Valley, Redwood and Mansfield, each helped in some way toward the final goal — a structure whose beauty of simple lines and modern design is the pride of the coast.