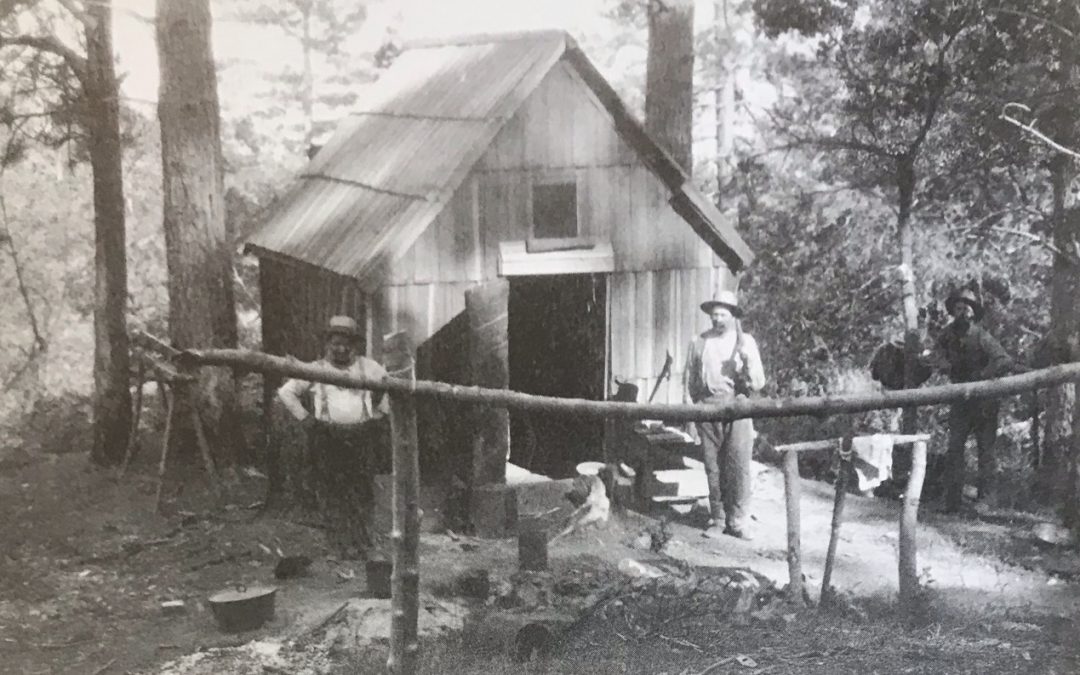 It is said that Mr. Melville often, when finding a good prospect, would carefully cover it up for future use, obliterating all signs and in some cases would not be able to relocate the place himself.

Henry Melville, who was a native of Australia, came to Soledad when the railroad ended there and ran a hotel and feed yard for many years. He married Mary Pugh, daughter of James P. Hugh, a well-known rancher of the Fairview district west of Soledad.

Melville was always interested in mining and discovered copper in the hills of the Pinnacles east of Soledad. He founded the “Utanic Copper Mines Incorporated.” He had a ranch in the foot hills nearby where the famous bandit Tiburcio Vasquez often visited. The caves of the Pinnacles were used by Vasquez as a hide out for years.

MELVILLE became involved in a law suit over the ownership of the copper mines at the Pinnacles and left there for Los Burros where with the help of his sons, he operated his claims to the end of his days.

Melville was a man of giant stature and incredible strength. At one time he came upon two men so intent on robbing his cabin at Los Burros they did not hear him approach. One of them was standing in the doorway watching his partner gather up the loot and Melville grabbed him from behind and lifting him up in his arms threw him heavily on the ground. Then he went for the other and did likewise, warning them if they were not out of the mountains by sunset, it would be the coroner who would come for them.

His sons tell of having a wagon heavily loaded with green wood, that needed a wheel greased and his son Lester started to put a jack under it, when Mr. Melville impatiently picked up the wagon and held it while they took the wheel off. Many such tales are told of his tremendous strength.

Mr. Melville kept his home and business at Soledad, but never neglected to come to Los Burros yearly to keep his assessment work done on his mining claims. Henry, Lester, and Edwin were the only sons who were active in mining.

THE LAST trip Melville made into the mountains was in 1932 when he located the Redwood Claim. That same year a road was made from Willow Creek to the mines. Since early days a sled road had suffered for bringing in supplies. Three of the mills were shipped from San Francisco and unloaded at the Old Landing off Point Gorda and taken by sled to Los Burros. These mills were for Sam Pugh, Will Cruikshank and Clay Dodge. This was in the year of 1886.

Sam Pugh was the son of James P. Pugh. He located the Grizzly and Ajax mines, and was a partner of Arthur Lazier.

Cruikshank was the discoverer of the first paying mine “The Last Chance” and Clay Dodge had a claim at the head of Alder Creek.

On the old Melville place in Los Burros can still be seen, in the blacksmith shop, a giant forge with enormous bellows.

HENRY MELVILLE died in 1933 at the age of 90. He was active and hardworking to the end of his days. The elder Melville had 11 children. Eva is Mrs. Charley Howel and lives in San Francisco. Elsie, Mrs. Charley Bonafacio makes her home in Monterey. Hazel, Mrs. Carl Tarr, and Winifred, Mrs. Paul Winoni, both reside in Capitola. Will, a railroad worker, is dead as well as Henry, Jr. who lived on the old Melville Mine in Los Burros. Lester runs a dairy near Salinas. The other three boys are Clarence, Kenneth and Glenn.

The only one left at Los Burros is Edwin Melville who has had a life of varied activity. Born in Fairview district west of Soledad in 1890 his younger days he spent mining and then broke horses. He became expert at handling horses and drove as many as 18 horses with four wagons using a jerk line. He hauled grain and hay out of Peach Tree country. For a few years he farmed on the Mathews ranch and had a blacksmith shop in San Lucas. He also ran a hay baler at one time.

In 1912 Edwin married Caroline Rianda of San Lucas (a sister of Keeley and Beansoup). Their children are Irene, Mrs. Mike Rodrigues of Monterey; also living in Monterey is Marjorie, Mrs. Vern Smith. Dorothy, Mrs. Al Smith, lives in Marina. A son Douglas is in the roofing business in Pacific Grove. Barbara is married to James Mead who owns and operates the Mead Produce Store in Del Monte. Nancy is Mrs. Don Chadwick, they live in Monterey where Don works at Purity Store. In 1940 Caroline died leaving Edwin alone until 1948 when he married Mrs. Burma Nunes of Monterey, whose daughter Betty is the wife of Leland Melville, son of Edwin’s brother Clarence.

Ed and Burma, as they are called by their mountain neighbors, live in the “new” house on the ridge above the old Melville Mine. They are happy here driving to Gorda for mail once a week and not too far from their children who all have homes in or near Monterey.

THE MELVILLES all had quick tempers and more than once the sheriff had to be called to settle an argument either between the brothers or with the neighbors. Ed, who gave us this story, is one of the “peaceful Melvilles” and is considered a very good neighbor. He lives not far from “Mother Krenkel’s” home and he says of her, “There is a woman I always fairly worshipped and can say she is a real friend.”

Since the Melville Mine is still in litigation, Ed does no mining, but he keeps busy at his mountain home and tinkering in his shop. He is among the last of the old timers who remember when the quiet hills of Los Burros were teeming with mining activity.