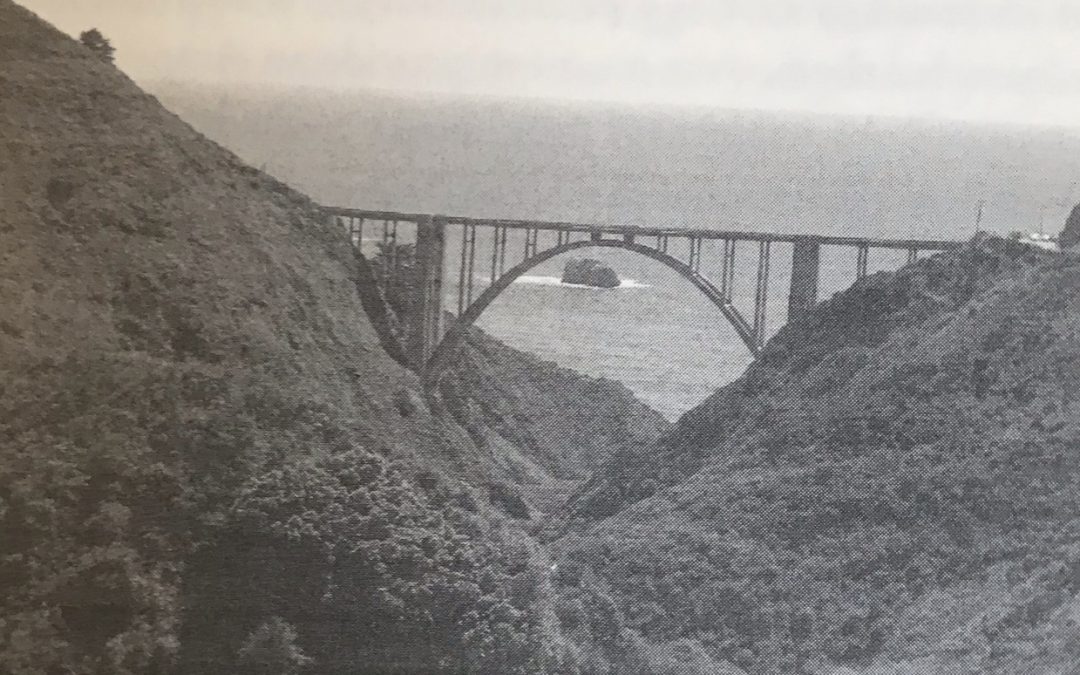 “The new order cometh and the old order passeth away.”

We know that change is inevitable and comes in the name of progress. Progress – what is it? “An advance toward better or ideal conditions or that conceived to be better.”

People lived happily on the coast before the road came. Certainly they had fewer problems. But that belongs in the past.

In 1937 when the coast road opened one of its unique features was Dolan Creek Bridge. This was a copy of an old bridge in Germany and at that time was the only s ingle arch wooden bridge in this country.

DOLAN CREEK was named for an early settler named Phillip Dolan who homesteaded in this area and built just south of the creek near the road and later bought the Dimas place adjoining. Married to a Mills girl from Palo Alto, Phillip was happy, working hard to clear his land and make a living for their seven children. When the time came to send the children to school Mrs. Dolan moved with them to their ranch in Castroville leaving Phillip to batch on the coast home, making occasional visits to his family.

Phillip Dolan was a rather eccentric man and many stories are told about him. He did not trust banks and would keep his money hidden about the place and always carried large sums with him. He drove his cattle to Monterey alone on foot when ready for market. One day after stopping to eat his lunch he left his coat by the roadside near the Cooper ranch. A few miles further on he remembered it, but thinking to himself “No one will bother to pick up a ragged old coat” he went on, sold his cattle and on the way home picked up his coat where he had left it with $1,000 in cash intact in the pockets.

Phillip Dolan died about 1909 and his sons leased the coast ranch to John Little. Later George Harlan took over the lease and it was to the Dolan ranch he brought his bride in 1916. Later on the Earl brothers, John (Chum) and Billy of Jolon leased the Dolan ranch and ran cattle. Billy Earl lived for many years.

THE DOLAN heirs sold the ranch to the law firm of Hudson, Martin and Jorgenson in 1920 and Billy Hudson, son of George Hudson acquired the Dimas place and that part of the ranch as far south as Rat Canyon. Hudson’s home on the edge of the cliff at the mouth of Dolan Creek was a Sunset Award home in 1959.

Lime Creek is just north of Dolan Creek and it was here that Lillian Ross, author of “The Stranger” and her sculptor husband, Harry Dick, came on their honeymoon in 1916. They came walking along the trail and lived many years in Mrs. Livermoore’s house on Lime Creek. “This was the happiest time of my life,” Mrs. Ross often said.

Mrs. Ross loved the coast and lived the rest of her life here. In her ballad of Big Sur she wrote “The South Coast is a wild place and lonely”. The wild and lonely places still exist in the deep canyons and high mountains in spite of the ever increasing stream of traffic on the coast highway.

Now Dolan Creek is humming with the activity of the bridge crew and the deafening sound of tractors, cranes and cement mixers fill the air. The quaint wooden bridge will soon be torn down and replaced with a modern steel structure. There are new bridges being built on the coast road—Anderson Creek, north of Dolan and Willow Creek 20 miles south.

At Willow Creek an entire point is being removed to make room for the new bridge and tons of earth are being heaped on the south end of Willow Creek beach, to the dismay of the rock hounds whose favorite hunt it used to be, as precious jade is found there.

All in the name of progress – so that more and more people may enjoy the most scenic highway in America. – California’s “Wonderful One”.