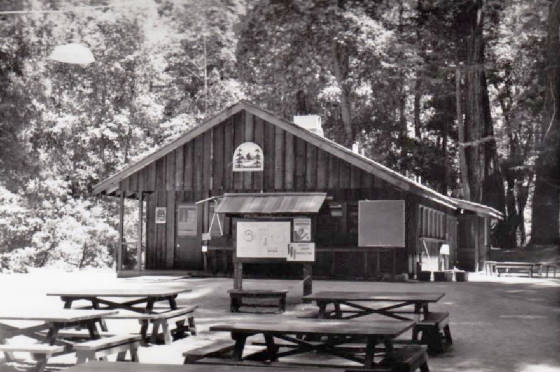 The rugged mountains between the Big Sur Coast and Jamesburg district were called “the Ventanas” by the early settlers. This means “The Windows” in Spanish. On the maps of Monterey County you will see Ventana Primitive Area, a fitting name as this is true wilderness country.

The headwaters of the Carmel River and Tassajara Creek are both near the South Ventana Cones, one running into Carmel Valley, the other into the Arroyo Seco. Northwest of these, the Ventana Double Cone marks the headwaters of the Little Sur River. The Double Cone is 4,833 feet above sea level. It’s two peaks overlooking miles of rugged wildness where mountain lions, coyotes and wild hogs roam at will.

Marshall Schultz occupies the lookout tower on the Double Cone, his lonely vigil broken only when Forest Ranger Bruce Alexander, stationed at Bottcher’s Gap, 16 miles away, packs in supplies over the rugged trail. This is a two-day trip.

Bruce Alexander, with his wife, occupies a trailer house at Bottcher’s Gap. Bruce is a very busy man, with miles of trail work, coping with thousands of summer hunters issuing fire permits etc. from his tiny improvised office.

From here one can look over miles of virgin wilderness with Ventana Double Cone in the distance, Pico Blanco to the right, and down into the North Fork of the Little Sur, where the Pico Blanco Boy Scout Reservation is located.

Pico Blanco can be seen from the Coast Highway at Little Sur River. It is 3,710 feet in elevation. The Alvin Dani family lived on the coast side of this peak in early days, and their family rode horseback to the Palo Colorado school. Their homestead was called the Peak Place.

Pico Blanco means White Peak, not on account of snow, as many think, but because of the white expanse of rock gleaming in the sun near its summit. The forest service maintains a public camp on the east side of the peak near the south fork of Little Sur River. The Boy Scout Reservation has been in existence for 10 years.

Mr. Walter Tavernetti started the project in 1950. The land was donated by the Hearst Corporation.

The road leading in from Palo Colorado left the Coast Highway at the Electa Grimes Ranch and ended near Turner Creek, leaving eight miles of road to be built through rugged terrain.

About this time Paul Harlan, coming from Oregon where he had farmed for several years, heard of the project and joined Mr. Tavernetti in his enterprise. They built the road into the present site of the camp on the North Fork of Little Sur River, fourteen miles from the coast, and one of the most beautiful spots in the state.

Paul Harlan has been in charge of the camp ever since it opened in 1952, and under his able and enthusiastic management it has been one of the most popular camps in the state. A swimming pool has been made by damming the river and all types of recreation can be found here. The capacity of the camp is 300 and the groups rotate every two weeks during the season. Boy Scouts from Monterey, Santa Cruz and San Benito counties come to the Pico Blanco Camp. Some of the older boys remain all season.

Ben Salterbeck of King City is one of the staff members this summer and several of the King City Explorer Post I just completed a fifty mile hike from The Indians through the Santa Lucias to Pico Blanco Camp. This will earn them the Boy Scout National Fifty Miler Award.

Situated in a large grove of redwoods on the bank of the river, the camp is an ideal site. On warm days the pool is filled to capacity, and the nearby trees offer shade while relaxing. Rigid order is maintained.

The boys help with camp chores, and a chapel is presided over by Father Franke, who comes from San Jose to spend a six-week vacation in the area. He also holds mass at St. Francis of the Redwoods Chapel at Big Sur, but most of his time is devoted to the boys camp, where he is both friend and counsellor, and beloved by all.

There is always plenty of excitement in camp. One of the most interesting sights is Paul feeding the wild hogs. He takes the camp garbage to a certain spot each evening and the wild hogs come at once to be fed. Some of them are so tame he can pet them. A small group comes at a time, and as they leave another will appear. These hogs were brought into the country from Russia in 1920 by George Gordon Moore and turned loose on his San Carlos Ranch in Carmel Valley. They have increased and are now found as far south as Salmon Creek. They are hunted throughout the Santa Lucias and this could eventually lead to their extinction. It would be well to shorten the season for hunting them.

I should also like to see the bounty taken off mountain lions. When you think of it how many people have ever seen a California mountain lion? “But the lion still rules the Ventanas and a man there is always alone.” (Lines from a ballad by Lillian Bos Ross)

Paul and Mrs. Harlan live near the camp in a little clearing among the redwoods. In winter it is a lonely life, as the road becomes impassible except for jeep travel. This will be their last year at the camp as Paul is retiring. After devoting 10 years to this most worthwhile venture we feel that he will miss the life at Pico Blanco. He and his wife, Doris, have a trailer home and they will find a place to live somewhere among the mountains they love so well.