An Old Landmark Lost with Removal of Mansfield Home 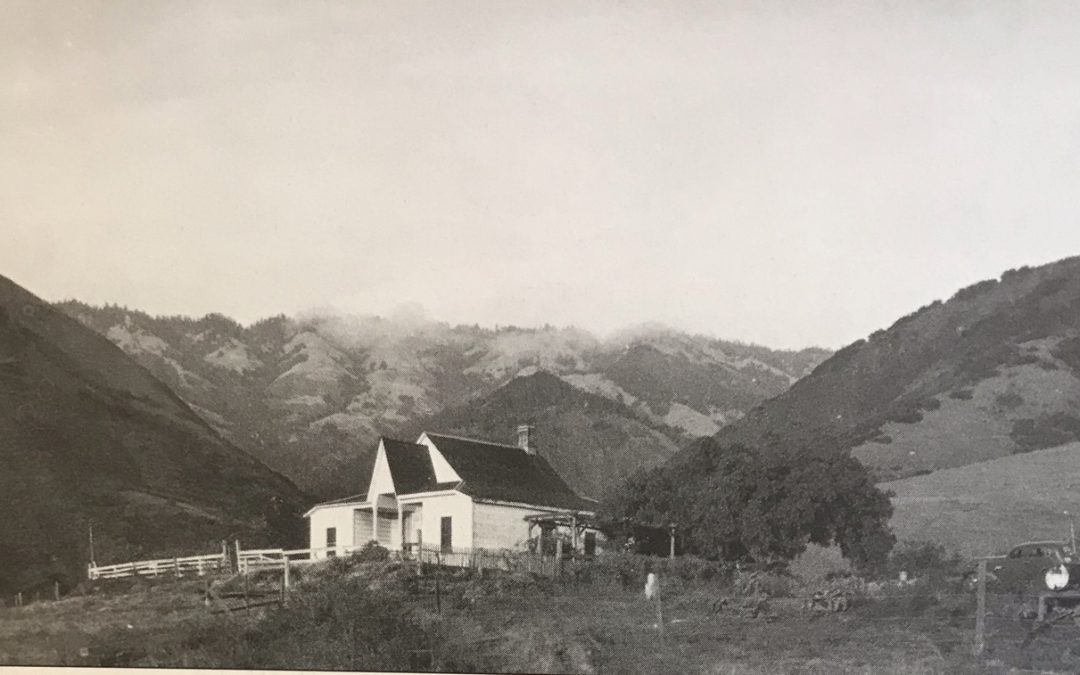 “This old house is getting shaky

This old house is getting old

This old house lets in the rain

This old house lets in the cold.”

These lines of a popular song ran through the mind of Mrs. Ralph Gould last winter as the rain poured through the broken skylight of her kitchen.

The Ralph Gould family has occupied this old home since coming to Pacific Valley early last year. Ralph has charge of the new campgrounds on the coast, established by the U.S. Forestry. One of these is Plaskett Creek Camp ground the other is at Kirk Creek five miles to the north.

The house of our story is the old Mansfield home and was built in 1887. Curnell H. Mansfield came to the coast in 1865 and had acquired a large acreage by the time he met and married Mendocina Plaskett, the daughter of his neighbor on the south William Lucas Plaskett.

THEIR FIRST home was near Prewitt Creek and it was here their twelve children were born. Edwin was their oldest child. The others were Sally, Asa (Jim), Laura, Jasper, Walter, Minnie, Sherman, Blaine, Marie Belle. Harry and Frankie died when children.

The family grew fast and by the time Jasper was nine years old they felt the need for a larger home and two of Mrs. Mansfield’s brothers, Reason and Robert Plaskett, were engaged to build it.

These young men were able carpenters and the work on the new house went fast. The lumber was all cut and sawed in nearby Prewitt Creek where a mill, which had been shipped all the way around Cape Horn, was set up. The lumber was hauled in stout wagons to the scene of action — from the canyon where the tall redwoods grew. The shakes were hand split and everything finished carefully.

“It was a happy day when the family moved into the beautiful new house with spacious rooms and wide porches. The living room with its high ceiling, large fire place and redwood panels was the scene of many dances through the years to come.

AFTER THE older Mansfields moved out Mr. and Mrs. Jasper Mansfield lived here and reared their family of six. In 1923 the land was sold to Hearst and the house was occupied by ranch foremen.

Among those who lived there were Mr. and Mrs. Sanford Twitchell, Mr. and Mrs. Monte Logan, and Mr. and Mrs. Fred Calkins and Mr. and Mrs. Bob Calkins. These and others were working for Hearst. After it was turned over to the U.S. Army the old house was abandoned for many years and was in a bad state of neglect.

When the U.S. Forestry took it over, it was repaired sufficiently to house some of the forestry families, but recently it has been condemned as unsafe and will be torn down in the near future and a new house built for the families of the forestry.

An effort has been made by the coast families to save the old house, but we are told it cannot be done as termites have invaded the building from foundation to rafters and the powers that be have issued the ultimatum and the old house that was once the pride of the coast, that served as U.S. Post Office for many years, that sheltered many families and rang with the laughter of countless children will soon be laid low.

The gnarled old pepper tree, planted near the kitchen door, by Mendocina Mansfield soon after moving into the house will be left standing to keep a lone vigil as the wind in its branches whispers softly of the ghosts of the past.